Intelligence is an highly genetic factor. 85% of intellectual variations observed are genetic variations. The remaining 15% is determined by the so-called « non-shared environment », which is essentially the prenatal environment, childhood diseases and the nutrient environment in early childhood.

There are a dozen of big genetic subdivisions in the homo sapiens species, a dozen of races/populations that are genetically distinguishable from each other, this is the definition of the term race in the biological sense, ie « subdivision of a species that inherits characteristics distinguishing it from other populations of the species. In the genetic sense, a race is a population that differs in the incidence of certain genes from other populations, as a result of isolation, most often geographical. «

Once there are genetic differences between races, there will be intellectual differences, it is impossible that it is otherwise. There are also race differences in the brain, both quantitative and qualitative.

The intellectual differences between races are mainly caused by genetic differences, in particular differences in the frequency of alleles linked to high and low intelligence (involved in brain size, nerve conduction or in different neurophysiological processes). For an in-depth discussion of the essentially genetic causality of intelligence, see « Intelligence Is Highly Genetic »

The table below gives a summary of race differences in intelligence. Each race is analyzed in more detail in the menu « I.Q by race ». The table lists the races in ascending order of intelligence levels, and gives their geographical location, the number of studies from which the average is made, the number of countries in which the studies were conducted, the average IQ and the range of IQ found. 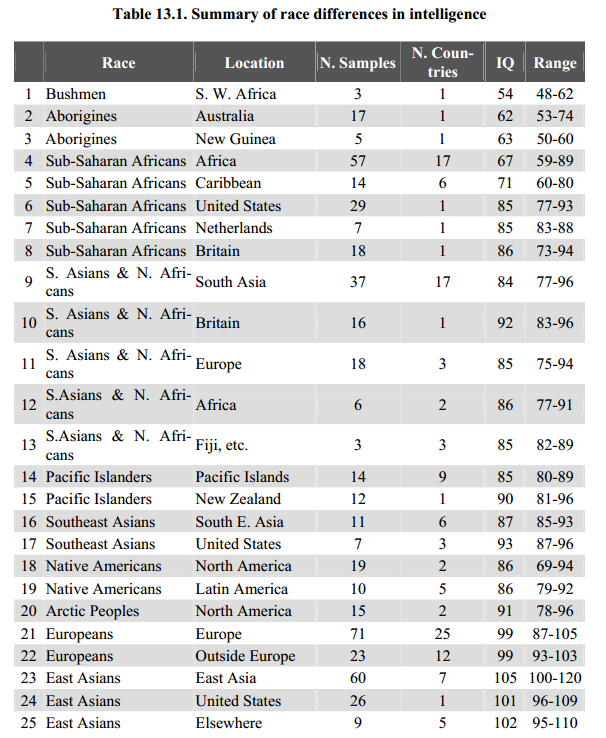 Line 1 gives a median IQ of 54 for Bushmen of the Kalahari desert from three studies in which the IQ ranges from 48 to 62. This corresponds to the mental age of an 8-year-old European.

Lines 2 and 3 give an IQ of 62 and 63 for Aborigines in Australia and New Guinea. The combination of these two results gives a weighted IQ of 62, the mental age of a 10-year-old European.

Line 4 gives an IQ of 67 for Africans in sub-Saharan Africa from 57 different studies. This corresponds to the mental age of an 11 year old European.

Line 5 gives an IQ of 71 for Africans in the Caribbean and Brazil, from 14 studies.

Line 6 gives an IQ of 85 for Africans in the United States, averaged from 29 studies.

Line 7 gives the same IQ of 85 for Africans in the Netherlands, derived from 7 studies.

Line 8 gives an almost identical IQ of 86 for Africans in Great Britain, coming from 18 studies. Thus, Africans outside Africa get higher IQs than Africans in Africa. There are two explanations for this. First of all, many Africans in the Caribbean, the United States, the Netherlands and Britain are racial hybrids with appreciable amounts of European ancestry. Secondly, Africans living outside Africa live, to varying degrees, in societies largely managed by Europeans and the standard of living is better, which increases I.Q largely thanks to better nutrition.

Lines 9 to 13 give the IQ of South Asians and North Africans in various places.

Line 9 gives an IQ of 84 for South Asians and North Africans in their home country, from 37 studies in 17 countries. This is the mental age of a 13 year old European.

Line 10 gives an IQ of 92 for South Asians and North Africans in Great Britain, from 16 studies.

Line 11 gives an IQ of 85 for South Asians and North Africans from Continental Europe from 18 studies in three countries.

Line 12 gives an IQ of 86 for South Asians and North Africans in Africa from 6 studies in two countries.

Line 13 gives an IQ of 85 for South and North African Asians from 3 studies in Fiji, Malaysia and Mauritius.

The IQs of South Asians and North Africans are quite uniform, ranging from 84 to 91.

Line 14 gives an IQ of 85 for Pacific Islanders, from 14 samples

Line 16 gives an IQ of 87 for Southeast Asians in their country of origin, from 11 studies in 6 countries.

Line 17 gives an IQ of 93 for Southeast Asians in the United States and the Netherlands. The reason why their I.Q is higher than in South Asia is probably that there have been some selective migrations and that the living conditions are higher.

Line 18 gives an IQ of 86 for Amerindians in North America, from 19 studies.

Line 19 gives the same IQ of 86 for Amerindians in Latin America, from 9 studies from 5 countries. The IQ of 86 is adopted as the best estimate of the IQ of the Amerindians.

Line 20 gives an IQ of 91 for Eskimos from North America, from 15 studies in Alaska and Canada.

Line 21 gives an IQ of 99 for Europeans, this is the average of 66 studies in 25 countries (this median excludes the Balkans, which are mixed areas with South Asia).

Line 22 gives an IQ of 99 for Europeans outside Europe, from 23 studies in 12 countries. The median of all studies is 99 and is adopted as the best estimation of Europeans’ I.Q.

Line 23 gives an IQ of 105 for East Asians in their country of origin, this is an average of 60 studies in 7 countries.

Line 24 gives an IQ of 101 for East Asians in the United States from 26 studies.

Line 25 gives an IQ of 102 for East Asians in other locations, obtained from 9 studies in 5 countries (Belgium, Brazil, Canada, Malaysia, Netherlands).

The reason why the IQ of East Asians is higher in their home country than in the United States and elsewhere is probably that there have been some selective migrations of those with below-average intelligence. In the case of Belgium, Canada and the Netherlands, it is not the case, because they are as high as in East Asia. It is possible that the lower IQ of 99 of East Asians in Brazil and Malaysia is partly attributable to the lower standard of living of these countries (the Europeans get in this study an average I.Q of 95). Due to the probability of some selective migration processes, an IQ of 105 is the best estimate of IQ of East Asians.

It is very important to understand that human races are not limited to a skin color, but rather to a set of morphological and psychological specificities, oriented in one direction, as we will examine in Rushton’s theory. Here is a chart that shows a set of specific traits with notable racial variations. 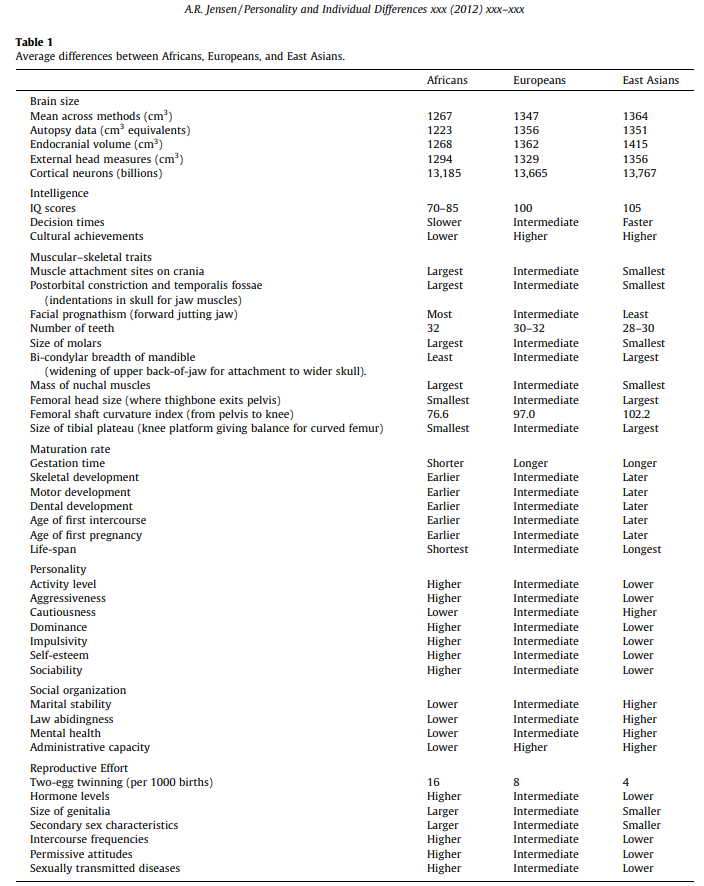 Mean I.Q of indigenous populations across the globe (Amerindians in America, Australian Aborigenes in Australia, Eskimos in North America …) 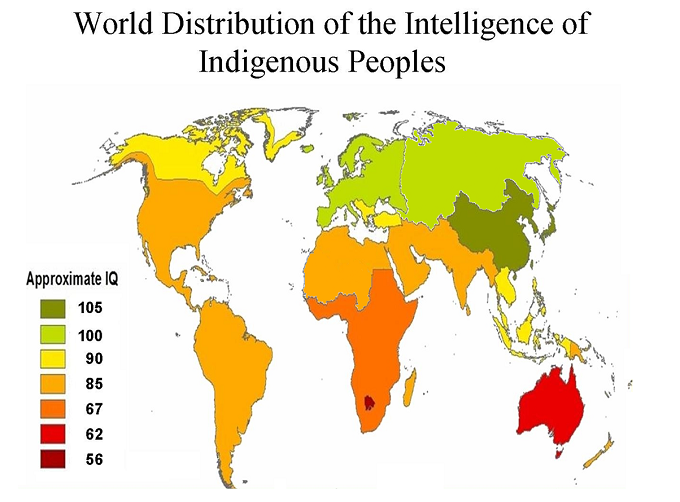 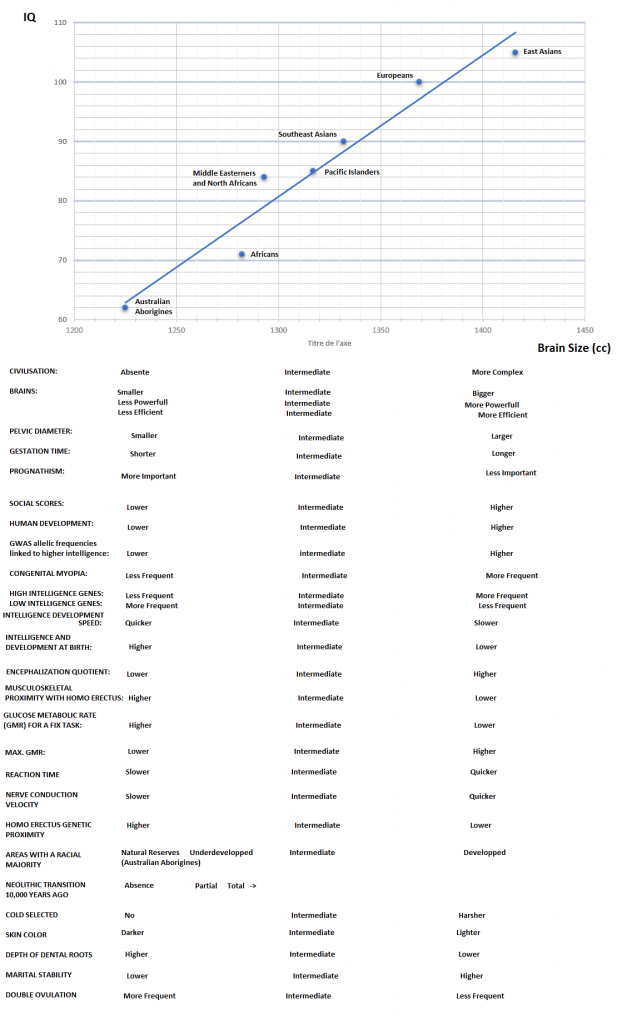 References for the whole page: